With more than 54% of India’s population falling under the age of 25 its GDP is expected to rise from a mere 6% to 15%. A deficit of about 200 million skilled manpower has become one of the major obstacles hindering the dream of a 5-trillion-dollar economy. The ‘Talent creation through Apprenticeship Program’ webinar held as part of the TeamLease Degree Apprenticeship's Apprenticeship Dialogues series took place on the International Youth Day. The webinar focused on how apprenticeship can play an important role in solving the problem of skill deficit in India.

Degree Apprenticeship as part of the New Education Policy 2020, though it had some relevant points, still seemed to miss the mark on the efficient establishment of apprenticeship according to the Moderator, Dhriti Prasanna Mahanta, General Manager of NETAP. A more relevant amendment would have been one that favoured not only the Indian youth but also the establishment organizations.

Also Read: NETAP- Shaping the Future of Employment with Apprenticeships

Anil Shukla, the HR Director for Schneider Electric, mentioned how his organization noticed a requirement to invest more in the younger population in order to create the best system. After hiring based on learnability and attitude, they implement a rigorous training program for five days. This was followed by 15 days of training, after which they are on the job, working under supervision. The official name of such trainees at Schneider Electric are trade apprentices or NAP apprentices according to Mr. Shukla. Celebrating their achievements while simultaneously taking them in as part of the Schneider Electric ecosystem naturally encouraged them to perform well.

Rabhir Sainani, the Head HR of Centrum Microcredit Ltd proceeded to share the practices at his establishment as well. The act of hiring apprentices has produced quick talent intake while cutting costs while simultaneously helping the government of India's goal of reducing unemployment in India. At Centrum Microcredit Ltd, there has been a considerable reduction in attrition and a great improvement in performance. The act of not differentiating benefits to different types of employees boosts morale and motivates them to work harder at Centrum.

For V. Saravanan, Head HR of Cavinkare -Trends Division, the NAP scheme has proven the most favorable. The unskilled employees hired in the bottom line get absorbed within a year based on the performance. This process has helped bridge the gap between the skilled and the non-skilled employees. It also helps that the government lends a hand by providing the certificates as well as the reimbursement according to Mr.Saravanan..

In regards to how digitization helped apprenticeship, the panelists provided information about interesting practices from their organizations. TeamLease and other apprenticeship aggregators have been greatly assisting organizations through online training programs. Thanks to the Government of India, degree apprenticeship itself has fully become digitized. While even with complete digitization there would still be a lack of on the floor training, it can be concluded that digitization cannot be the complete solution. According to Anil Shukla, having the young generation as the front runners has propelled the acceptance of apprenticeships as they are very creative, adaptable, and productive.

Coming to the New Education Policy 2020, the panelists wondered why the government has put so much of a limitation on a degree apprenticeship. They believe that industries should have got a free hand so that they could utilize their potential and make apprentice's future ready. With the current youth being quite a tech savvy, Pooja Mehendale did not find digitalization a challenge at all.

Then the panelists were asked about how most job roles were becoming obsolete and if apprenticeship could help create a future workforce for future skills. According to Anil Shukla, with job roles changing at such a fast pace, the education system and industry have to catch up. The panelists then came to a conclusion that there is a need to broaden the skilling part or re-skilling part so we can have more job roles or we can make a hybrid job role kind of a curriculum for establishments.

Moderator Dhriti Prasanna Mahanta concluded the webinar with great inputs from the panelists in regards to implementing apprenticeship programs, their degree of connectivity, and their role in alleviating talent challenges in the organization. Watch the webinar Now. 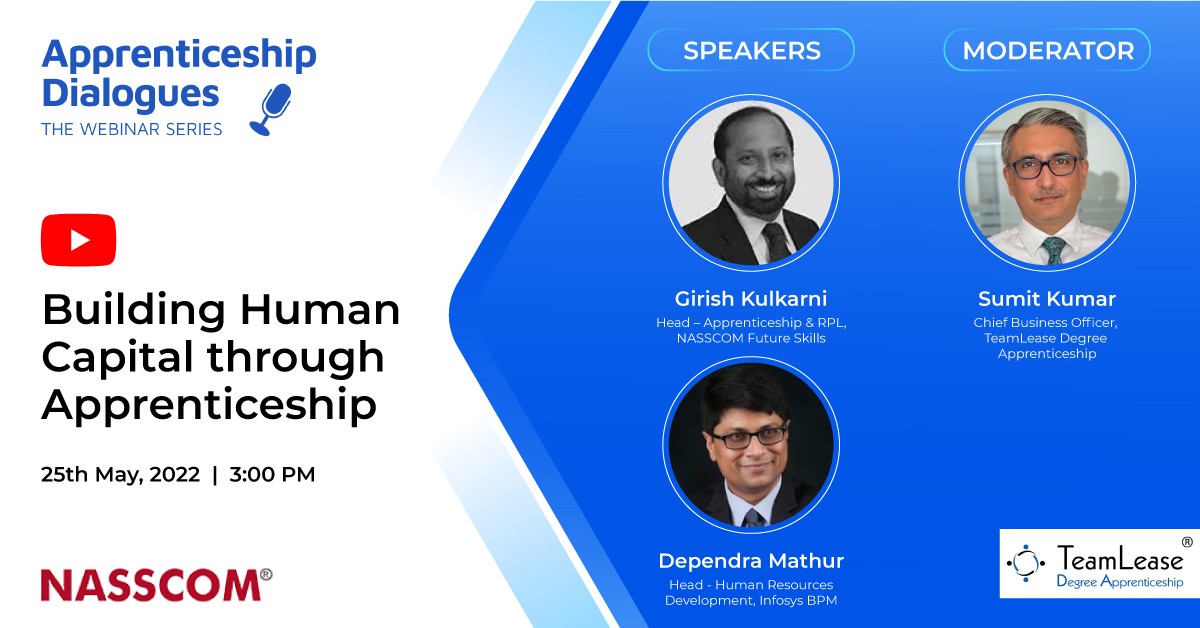